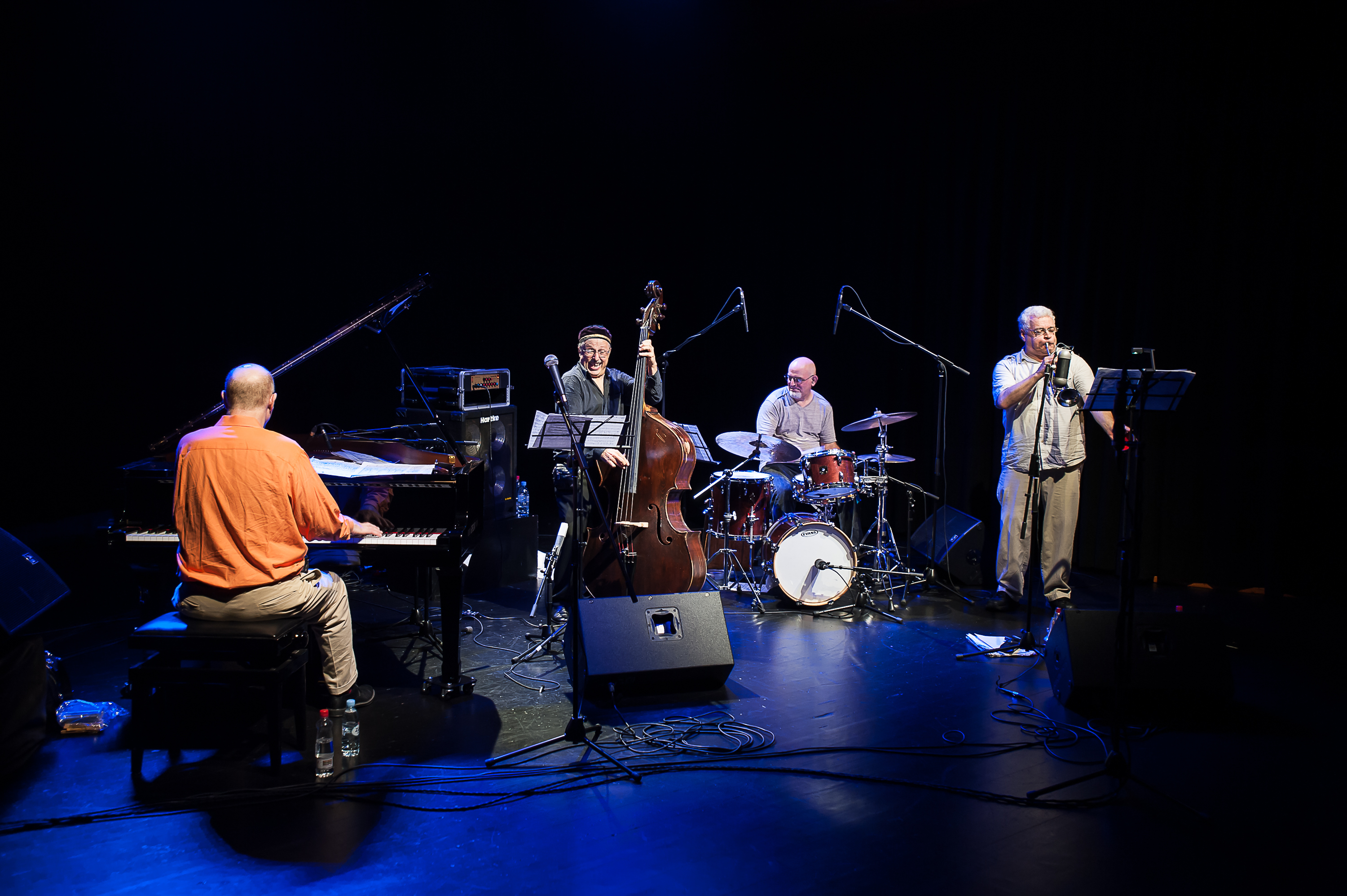 With over 35 years of performing together in a variety of ensembles including the Mosaic Sextet (Dave Douglas and Mark Feldman) and Liquid Time (Mark Whitecage and Dave Douglas), this powerful acoustic NYC based jazz ensemble features original music from co-leaders Joe Fonda and Michael Jefry Stevens performing with master percussionist Harvey Sorgen and the brilliant modern jazz trumpet legend Herb Robertson. The Fonda/Stevens Group has performed over 30 European tours in the past 20 years (1997 – 2016) and released 12 CD recordings including their latest release (Live from Spielboden) on the Artists Recording Collective Label. The group’s music has been featured on numerous radio broadcasts: BRTN (Belgium), Saarbrücken Radio (Germany), WDR Radio Köln (Germany), Radio Bremen (Germany), Radio Zurich (Switzerland), Radio Nürnberg (Germany) VPRO Radio Amsterdam (Holland) and has performed at a various festivals including: the Ottawa International Jazz Festival (Canada), Halo Jazz Days (Brugge, Belgium), Jazzmeille Thuringen (Weimer, Germany), Jazzkroe Gent (Belgium), Westfalisches Musikfest (Munster Germany), Edgefest (Ann Arbor, MI), Cerkno Jazz Festival in Slovenia, Jazz Goes to Town Festival in Hradec Kralove (Czech Republic) and most recently performed at the „Are You Free“ Festival in Slovakia and the Sibiu Jazz Festival in Romania! In March/April 2017 the quartet will be celebrating their 25th anniversary concert tour in Europe.
„Over the past fifteen years and the course of ten CD’s, the Fonda/Stevens Group has evolved into one of Jazz/improvised music’s most accomplished ensembles. Straddling the line between post-bob and free, they have come up with consistently satisfying albums. What’s impressive is how these four create a cohesive unit without grandstanding egos getting in the way.“
~ Cadence Magazine

„Michael – You and your band are awesome. Several people came up to tell me how your concert last week was one of the most enjoyable events they’ve ever experienced at the Vermont Jazz Center; the music conveyed a deep sense of purpose, humor and warmth, plus it was delivered with a superb sense of musicianship and communication. Thank you for the gift!“
~ Eugene Uman, Artistic and Educational Director, Vermont Jazz Center, April 4, 2008,

„You guys’ music is still reverberating here in Brandon. Many thanks. It was a smash. What brilliant musicians and music.“
~ Fran Bull, Gallery In the Field, Brandon, VT, April 4, 2008